Dr. Andrea D’Alpaos, Associate Professor at the Department of Geosciences, University of Padova.

Tidal landscapes are commonly dissected by networks of branching and meandering channels that control the flux water, sediments, nutrients and biota across these landscapes, ultimately impacting the ecomorphodynamic evolution and the stratigraphy of the platforms they incise. Although tidal channeled patterns have been extensively studied in the last decades, through field observations, mathematical modeling, and laboratory experiments, just a few studies on tidal meanders exist. Indeed, despite their prominence and wide occurrence, the characteristics and dynamics of tidal meanders lack the detailed investigation that has been devoted to their fluvial counterparts, so that questions remain on whether tidal meander dynamics are similar to (or rather unlike) those of fluvial meanders. Key differences suggest otherwise, such as, among others, the periodic reversal of tidal flows, the occurrence and magnitude of the landscape forming discharges and their spatial variations, the different behavior of the stage-discharge relationship, and the different mutual role of bend lateral migration and platform vertical aggradation.
Recent analyses of tidal meander dynamics carried out within the Venice Lagoon suggest that tidal meanders, traditionally viewed as quite stable landscape features, display migration rates per unit width and modes of migration quite similar to those characterizing their fluvial fellows. However, statistical analyses of relevant morphological features for about 10’000 meander bends belonging to about 100 tidal and fluvial channels worldwide suggest that tidal meanders display less complex planar configurations than their fluvial relatives, both at the single-meander and at the reach scale. In addition, field observations and modelling for both modern (in the Venice Lagoon) and ancient (Cretaceous Tremp Basin) meander deposits, show that tidal asymmetries may significantly influence erosion and deposition patterns together with sediment sorting along tidal meandering channels, thus providing appropriate proxies to detect tidal influence and the dominance of either ebb or flood flows also in the fossil record.
Interestingly, although the signatures of the different governing processes can hardly be unraveled by the analysis of tidal meander planform configurations and dynamics, detailed analyses of the internal architecture and sedimentary features of modern and ancient tidal point bars emphasize the existence of relevant differences that might be imprinted in the sedimentary record.
Results emerging from the analysis of modern and ancient tidal meanders, carried out for different systems worldwide on the basis of a multidisciplinary approach coupling field observations and numerical modeling, can improve current knowledge of tidal meander dynamics and of the related stratal architecture, a key issue for the evolution and restoration of coastal landscapes, exposed as they are to natural and anthropogenic environmental change. 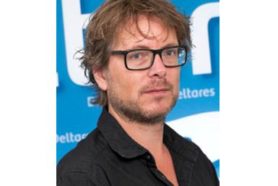 Alluvial estuaries form an intricate pattern of tidal channels, shoals and tidal flats, often characterized by alternating, mutually evasive ebb and flood channels connected by shoals or sills. Such estuarine systems are dynamic, with channels and meanders migrating laterally in response to tidal forcing, but over longer timescales they are in dynamic equilibrium. In past centuries, and especially in recent decades, many estuaries worldwide have been modified in order to reclaim land and to allow ever larger ship access to inland waterways. These interventions include the deepening, straightening and narrowing of tidal channels, resulting in modified tidal dynamics and as a result, complex morphodynamic feedback. With ever increasing pressure resulting from human interventions and Sea Level Rise, there is a rising need to predict the effect of present-day and future human interventions. Unfortunately, understanding the impact of historic human interventions on tidal dynamics and morphodynamics, for which observational data is available, is already challenging. Still, a thorough understanding of the pas is crucial before attempts are made to predict the effect of present-day (or future) interventions. Mathematical models are becoming increasingly more accurate tools to hindcast and predict estuarine. However, despite their mathematical simplicity, the impact of human interventions was already surprisingly accurately described using classical descriptive geomorphology.
The pioneering work of van Veen (1950) on estuarine morphodynamics meant a breakthrough on unravelling the impact of human interventions on tidal basins in general, and the Ems Estuary in particular. At that time, the existing main channel of the Ems Estuary was degenerating while a new channel took over its role. Van Veen hypothesized that the degenerating channel was the ebb channel, losing its flow capacity because to a flood channel because the sill separating two flood chutes was removed. As described nearly simultaneously by Gerritsen (1952), this deterioration of the ebb channel was enhanced by the reclamation works in the Dollard, further reducing the channel capacity. Estuarine science has greatly progressed since then, both in physical understanding and in development of analytical and numerical tools. These modelling tools allow us to hindcast estuarine evolution, and thereby investigate the relative importance of historic changes, but also predict the effect of present-day human interventions. Current research activities in the Ems estuary are strongly driven by the observed increase in suspended sediment concentration (and its adverse ecological consequences), which is largely attributed to the range of human interventions that occurred in the past decades to centuries.
This lecture will address the progress in understanding the morphologic effect of human interventions, from the descriptive geomorphology practised by van Veen and Gerritsen, to the more quantitative model-based approaches used today. We will show recent progress in modelling the dynamics of tidal channels in the Ems Estuary on timescales of centuries. A comparison with old maps shows that such model simulations can reproduce the large-scale development of the estuary, but also reveals that the present-day morphology is strongly influenced by human interventions which took place centuries ago. Also on shorter timescales there is a strong link between human interventions and the suspended sediment concentration, as will be quantified and explained using numerical model approaches.