A greater story in context, and an overview in minutes. That was the idea of the Brunings lecture of 2020. Click on the circles, follow the storyline of your interest and see below for brief stories and main conclusions. The storyline texts are fully referenced to their underlying scientific publications (do email the link to Maarten Kleinhans if you can’t get access). Now watch the movies (or go to our youtube channel): 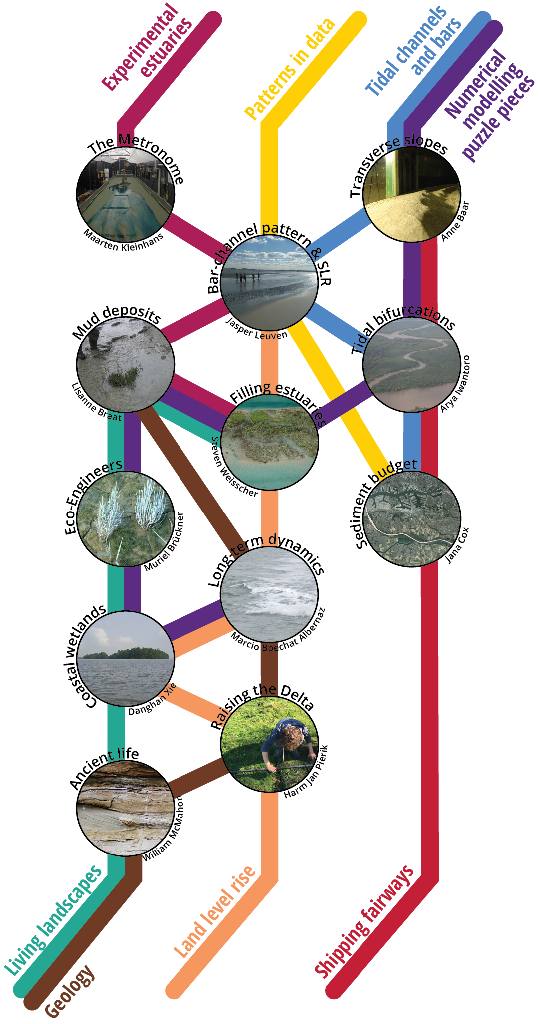 The stories behind the lines below contain links to our publications (as far as published). A full list can be found on the website of the PI.

Tidal bars and tidal meanderswere compared with fluvial counterparts and with predictors. The channel networkshowed effects of dredging and disposal in the Western Scheldt, in numerical models and in the Metronome experiments. The mutually-evasive ebb- and flood-dominated tidal channels formed in experiments from an initially plane bed, and were identified in bathymetric data with the network tool.

Watch all videos from the storyline Tidal channels and bars.

The settling, growth and mortality of live plants and animals affect flow and sediment dynamics in various ways. We studied this by pattern recognition in field data, by numerical modelling and by experiments in the Metronome with live plants.

The resulting living fluvial and coastal landscapes are quite different from landscapes of only sand or gravel. Unlike floodplains in rivers, the unvegetated mud flats in estuaries are bioturbated and mobilized by benthic animals. But similar to rivers, the combination of mud and salt marsh or mangroves narrows channels and stabilizes estuarine flanks, and bar and meander surfaces.

Moreover, vegetation settling and mud flat accretion reduce the tidal prism and limits the size of estuaries, while the size of rivers is mainly determined by flow discharge.

Watch all videos from the storyline living landscapes.

We created estuaries in a tilting flume called the Metronome about a thousand times smaller than in reality. The tilting makes the sediment mobility as large as in nature. Bars formed with characteristic tidal features, and estuaries developed shapes similar to natural systems. The sand is rather coarse to avoid the tendency to form the unrealistically large ripples and deep scour holes that would form in fine sand.

Estuaries without mud flats and saltmarsh or mangroves are incomplete. Crushed nut shell of a range of sizes simulates the suspended mud that is deposited on mud flats. The habitats and eco-engineering effects of river and saltmarsh vegetation are represented by seedlings of five plant species. Flow measurements by particle imaging velocimetry are difficult and experiments are complemented by experimental-scale 2D flow modelling.

Watch all videos from the storyline Experimental estuaries.

Patterns are easily recognized by human eye, but difficult to recognize and characterize automatically. For fair comparisons between different natural systems, models and experiments we made datasets and developed analysis methods. Tidal bars and tidal meanders were compared with fluvial counterparts and with predictors. Biogeomorphological maps were created from aerial photographs of all three Dutch estuaries and the Wadden Sea by a nearly fully automated Object-Based Image Analysis method. These maps are needed to create ecotope maps and monitor the Natura2000 state of entire water systems. Rijkswaterstaat henceforth applies this as the standard method in the Wadden Sea and the Eastern Scheldt.

In collaboration with Speckmann et al. (TU Eindhoven) a channel network identification code was developed for bathymetries. The resulting networks showed effects of local disturbances such as dredging and disposal but also shoal margin collapses in the Western Scheldt, in numerical models and in the Metronome experiments. Tidal networks have a different character from those in rivers.

We used many datasets of bathymetry, corings and other measurements. Historical maps and satellite images can now be transformed to bathymetries in various ways.

Watch all videos from the storyline Patterns in data.

Many morphological properties of fluvial and tidal systems are determined by the bed slope-driven component of sediment transport, which we studied in detail. The parameterization of this effect determines bar dimensions, degree of braiding, bifurcation development and bend sorting and has major consequences for predicted channel depth and dredging volumes. We made new guidelines to aid model development, pending further process study and model improvements.

New mud simulation models were applied to estuaries for formation of mud flats. In the fluvial-tidal transition, floodplain and levees formed with similar morphologies and subsurface stratigraphy as found in the Dutch Holocene coastal plain.

The settling, growth and mortality of live plants and animals affect flow and sediment dynamics in various ways. Building on our earlier riparian vegetation model(also including mud), new codes were developed for saltmarsh and mangroves, for microphytobenthos and for typical macrobenthic species.

Watch all videos from the storyline Numerical modelling pieces.

The Holocene plain of the Netherlands recorded parts of the past living coastal and fluvial landscapes. We studied how the underlying older, inherited landscapes and lithology affected the Holocene systems. The size and persistence of the river affected size, shape and development of about ten tidal systems. Hard substrates can reduce the depth of main channels, which affects not only bar pattern and dynamics but also the planform shape of the entire estuary, such as in the Eems-Dollard. Part of the erosion-resistant substrates were formed as mud flats, particularly on the flanks of estuaries as found in data of the Western Scheldt and numerical models.

This raised questions about the role of waves and of vegetation and levee formation on the closure of tidal systems such as the Old Rhine that we studied with experiments and models. In turn, the effects of present eco-engineering species on fluvio-tidal systems raised the question what effects of eco-engineering species of the past were, in particular before and after the evolution of the first land plants. This was studied in outcrops worldwide.

Watch all videos from the storyline Geology.

Access to main ports such as Antwerp and Rotterdam requires sufficient fairway depth. Our work on dimensions and dynamics of tidal bars and channels provides system understanding that contextualizes detailed numerical modelling for specific estuaries. Models and Metronome experiments showed that there are various long-term effects of dredging and of typical disposal strategies, which have consequences for littoral habitats and for flood safety. The formation and dynamics of multi-channel network estuaries such as the Western Scheldt and the Ems-Dollard were studied from field data, experiments and modelling.

Watch all videos from the storyline Shipping fairways.

The formation and dynamics of living coastal and river landscapes shows that their persistence requires ongoing processes of sedimentation. However, dikes and water management have terminated these processes for large parts of the lowlands for flood protection, agriculture and other functions. This puts these areas at grave risk due to ongoing subsidence and the sea level rise that will be caused by human-induced climate change.

We investigated how natural sedimentation processes formed the present landscapes. Our aims are to understand how controlled reintroduction of floods in embanked areas can raise the land to keep up with relative sea level rise. We studied the palaeography of the Rhine-Meuse delta in general, of the Old Rhine in specific, and of the land reclamation history at the Eems-Dollard estuary, and created filling estuaries in the Metronome and in numerical models.

Watch all videos from the storyline Land level rise.

The main findings at a glance

Between all the story lines, a picture emerges how estuaries form and function. The processes of sand and mud by currents and waves shape channels, bars and mudflats. Bars, in turn, may force the entire estuary to shape around them. Small-scale plants and animals also modify the bars, banks and form freshwater levees and floodplains, saltmarsh and mangroves. These, in turn, determine the long-term development of estuaries.

The antecedent landscape setting (accommodation space) is the canvass on which filling estuaries form or into which ingressive estuaries erode. Estuaries are limited in growth and may fill up mainly because of the mud and vegetation settling on the limits and on the levees. And the constrained waterscape feeds back to the channel and bar patterns and their dynamics.

On the other hand, dense vegetation may limit the throughflow of mud onto bars and banks in models of saltmarsh, of floodplains, of mangroves and in Metronome experiments.

Some novel conclusions from our projects are:

For evidence, context and assumptions behind the conclusions, and more insights, see our papers.

13:30 Patterns in the sand: a story about bars, bends, bifurcations and mud
Break: historic map exhibition in the Library
15:00 Living waterscapes and land level rise: a story about past and future
15:45 walk to Earth Simulation Lab for drinks at the Metronome

These are the Brunings2020_lectureslides of the live presentation.